and graph it. In the given figure, it is shown in red. Because it lies entirely above the x-axis, we know it has no real roots.
Now, reflect the graph of the quadratic through its bottom-most point, and find the x-intercepts of this new graph, shown in green. Finally, treat these intercepts as if they were on opposite sides of a perfect circle, and rotate them both exactly 90 degrees. These new points are shown in blue.
If interpreted as points in the complex plane, the blue points are exactly the roots of the original equation! (In our example, they are 2+i and 2-i.) 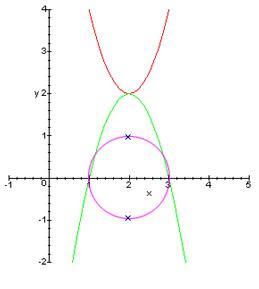