Today is the 130th birth anniversary of great Indian Mathematician Srinivasa Ramanujan and so is National Mathematics Day.
Srinivasa Ramanujan was born on 22 December 1887 in Erode, Tamil Nadu. He is a man known for his work done in the field of mathematics. And that too with no formal training of that subject which others are getting in European countries.  Ramanujan developed his own mathematical research in isolation. Some extraordinary contribution done by him in the field of mathematics are – mathematical analysis, number theory, infinite series, and continued fractions. Along with this, the legend has provided many theorems.
He was enrolled into Telegu School, but found it too tiring and uninteresting to attend school and mostly he use to ran away from there. Later in 1904, he graduated from Town Higher Secondary School. He also received a scholarship to study at Government Arts College in Kumbakonam. During his studies he was so influenced by studying mathematics that he could not focus on any other subject and failed in all of them. This resulted him in losing the scholarship. Later, without any degree, he left the college and continued to pursue independent research in mathematics.
His unconditional love for mathematics was driving him to develop new things for that subject, but to support his livelihood he was working as a clerk in the Accountant-General's office at the Madras Port Trust Office. He kept working on inventing new mathematical theorems and continuously tried contacting the experts from west.   G.H. Hardy, an academician at the University of Cambridge, recognized the brilliant work produced by Ramanujan and invited him to visit and work with him at Cambridge. Here, Ramanujan became a Fellow of the Royal Society and a Fellow of Trinity College, Cambridge.
Some of the known works, produced by this great mind, are - Landau–Ramanujan constant, Mock theta functions, Ramanujan conjecture, Ramanujan prime, Ramanujan theta function, Ramanujan's sum, Rogers–Ramanujan identities and Ramanujan's master theorem.
Ramanujan died on 26th April, 1920, when he was only 32 years of age. In this short life he gave around 3900 results, mostly equations and identities and almost all of them prove to be correct and original.
G. H. Hardy liked to rank mathematicians on a scale of 1 to 100, and he gave himself 25, Littlewood 30, David Hilbert 80, and Ramanujan 100, which shows just how great Ramanujan was.
The Indian mathematical genius Srinivasa Ramanujan was born on 22 December 1887. It was in recognition of his contribution to mathematics the Government of India decided to celebrate Ramanujan's birthday as the National Mathematics Day every year and to celebrate 2012 as the National Mathematical Year.

Another Ramanujan in the making

Srinivas Raghava is receiving 'Bharat Ganita Sri''  Award. We are proud of Srinivasa, who is considered to be another Ramanujam in the making as discussed in the articles below.


The mathematical constant π (pi) is special for a number of reasons. One of them is that there are at least two holidays dedicated to pi: Pi Day celebrated on March 14 and Pi Approximation Day observed on July 22. 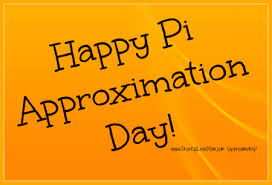 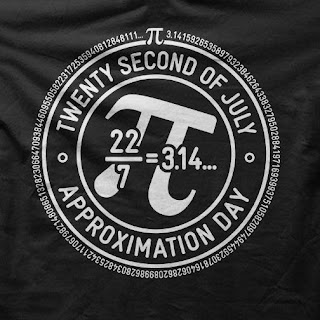 The number pi is the ratio of the circle's circumference to its diameter. It is an irrational number, which means it can't be expressed as a common fraction. However, fractions and other rational number are commonly used to approximate it in order to facilitate calculations.
The fraction 22/7 is one of the most widely used approximations of pi. It dates from Archimedes. 22/7 is accurate to two decimal places (3,14). Pi Approximation Day is celebrated on July 22 since this date is written 22/7 in the day/month date format, which is viewed as a reference to the fraction 22/7.
Pi Approximation Day was first celebrated in the Chalmers University of Technology, Gothenburg, Sweden. Both Pi Day and Pi Approximation Day are marked with cooking and eating pie, as the words “pi” and “pie” are homophones in the English language.
Happy Pi Approximation Day…
Amit Bajaj

Meet Maryam Mirzakhani, the first woman to win the 'Nobel Prize Of Math'

Maryam Mirzakhani, the math genius from Iran, was born on May 3, 1977. She became the first woman to be awarded the Fields Medal, the highest award in mathematics, aka the Nobel Prize of math. The International Mathematical Union chose to give the honor to Mirzakhani after she discovered new advances in the theory of Riemann surface. The organisation gives out awards every four years to some of the best mathematicians under the age of 40. 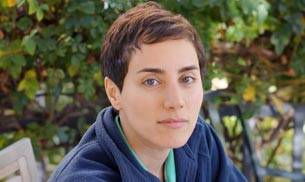 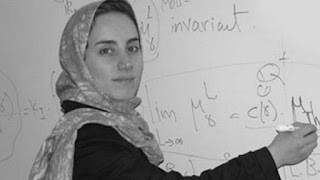 The low representation of women in STEM academic faculty and leadership roles are still not known as studies show no biological differences that would explain it happening. According to the National Academy of Sciences, being the first female to win this prestigious award, people are considering this as the first sign of many changes for the future.
Mirzakhani began to make a name for herself internationally in 1994 and 1995 when she competed in the International Mathematical Olympiads
She won gold at the International Mathematical Olympiad. It is the world's most honored math tournament for pre-college students
She got her undergraduate degree at the Sharif University of Technology in Tehran, Iran
Mirzakhani later went-off to Harvard University to get her PhD with her thesis on the geometry of moduli space
She now works as a professor of mathematics at Stanford
Her studies have potentially innovated different areas of subjects and topics like mechanical engineering and material science
She continues her work on similar topics, including hyperbolic geometry, topology, and both the dynamics and the geometry of Riemann surfaces
She's known for doodling on giant sheets of paper when working on math problems.
Mirzakhani motivates girls to follow their dreams:
In an interview to Stanford News she said, "This is a great honor. I will be happy if it encourages young female scientists and mathematicians. I am sure there will be many more women winning this kind of award in coming years. I think it's rarely about what you actually learn in class... it's mostly about things that you stay motivated to go and continue to do on your own."

Dear class XII students,
I am sharing the YouTube links of various videos based on the chapter Inverse Trigonometry. These videos are prepared by  my friend and an excellent maths teacher.
Please do watch, share and like.

5 COMMON ERRORS in Inverse Trigonometry along with its application
https://youtu.be/bB7jfqbf9Do

Suggestions for students preparing for the exams

Before going to the Examination Hall

1. Avoid indigestible food, excessive liquids and stimulants like cola, coffee or tea in the previous night.
2. Avoid late night reading.
3. Sleep for six hours at least, to get enough rest.
4. Avoid discussion about previous papers.
5. Plan some relaxation in the morning like listening to light music or going for a short walk or a jog for 15 to 20 minutes.
6. Do not attempt any new revision topics on the day of examination.
7. Eat light food with good nutritive value well before you start from home on the way to examination hall. Keep a small water bottle along with to keep you well hydrated.

In the Examination Hall

1. Minimize waiting time outside the examination hall. It is always good to have known the exact examination hall and seat on the previous day.
2. Walk straight into examination hall on the day of examination.
3. Avoid anxiety provoking discussions with friends e.g. discussion on topics or questions or nervous feelings you have, etc.
4. Practice positive self-statements like "I am going to do well", "I am well prepared for this examination', ‘I have come here to pass the examination with good grades’.

In the Examination Seat
1. Settle and compose yourself.
2. Layout your equipment. e.g. pen, pencil, compass etc at leisure with cool mind.
3. Take fifteen minutes to read the paper and check instructions carefully and then underline key words in questions in your mind and plan.
4. Try to write legibly.
5. Leave space after each answer.
6. Select the question you know the answer best.
7. Write simply in short sentences, with correct spellings.
8. Avoid long background introductions in your answers.
9. Do not worry about the number of supplementary sheets used by the other examinees. Just concentrate on your own job.
10. Plan your time - drive the time according to the marks allocated to each question.
11. Stick to your time budget - try to keep ten minutes time at the end so as to permit you to tie supplementary, check roll no. etc.
12. If you are running out of time - remember that two half answered questions fetch more marks than only one fully answered question. So never leave any question unattempted.
13. Always leave fifteen minutes in the end to check your answers. This strategy helps to make minor changes, recheck any inadvertent omissions and adds to the mental peace for further examination papers.
Wish you all the very best for the examinations. It's absolutely fine and normal to be nervous. But your nervousness must never hold you back from performing your part.
All is well! Learn to Smile through Stress. Stay calm, be cool, be healthy, eat healthy, prepare well, do well and then wait for the magic to unfold. The World's all yours ... Go, Win it !

MOST IMPORTANT QUESTIONS FROM NCERT BOOK (Question Numbers from each exercise)

Sample Papers by Directorate of Education (given to every Government School Students):