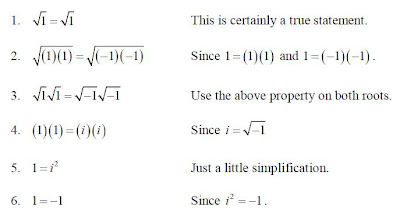 So clearly we’ve got a problem here as we are well aware that step 6 is not true! The problem arose in step 3. The property that I used has the restriction that a and b can’t both be negative. It is okay if one or the other is negative, but they can’t BOTH be negative!
Ignoring this kind of restriction can cause some real problems as the above example shows.
at July 30, 2009